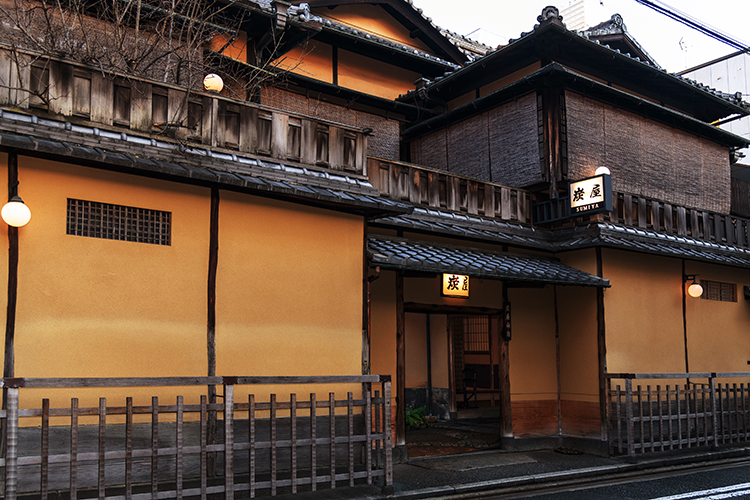 Sumiya Ryokan can also be called as the “inn for tea ceremony” for its deep connection with Urasenke (one of the three main schools of tea ceremony in Japan). Long been the adoration of tea masters, it is a traditional space that thoroughly delivers the hospitality spirit of tea ceremony.

Standing out in the Sanjo Fuyacho area in the bustling center of Kyoto, the inn has a remarkably calm Sukiya-style appearance. Sumiya Ryokan, which has long been well known as the “inn for tea ceremony” across the country, had its roots as a foundry that dealt with sword guards and sliding door pulls, and it was tea ceremony that changed the place into an inn. Yousuke Horibe, the refined owner two generations ago, had a deep connection to the Urasenke family. He welcomed and entertained the head of Urasenke as well as other like-minded people daily, and Sumiya became a place to stay for people from all over the country who came to practice tea ceremony in the early Taisho period. It can be said that his successor Kosuke Horibe, a tea master himself who served as a senior member for the Urasenke family, used two generations of cultural activities to establish the Sumiya name widely known as the tea ceremony inn. Guests can see carefully sprinkled water in the garden after passing through the front door. Stepping past the entrance, the atmosphere changes suddenly as if inviting the guests into the world of wabi (rustic simplicity), and the elegant charm of the inn deepens as one goes further in. A lot of the elements in the inn embody the “Ichigo Ichie” (a concept closely linked with Zen Buddhism and transience that roughly means “once in a life time”) concept of hospitality in tea ceremony: through the changing scenery from room to room across seasons, through the simple aesthetic adornments in the rooms, and through dishes that reflect the seasons. The inn stimulates guests’ five senses in various forms to inform the tea ceremony spirit, so regardless of how many times one visits, there will always be fresh new discoveries. 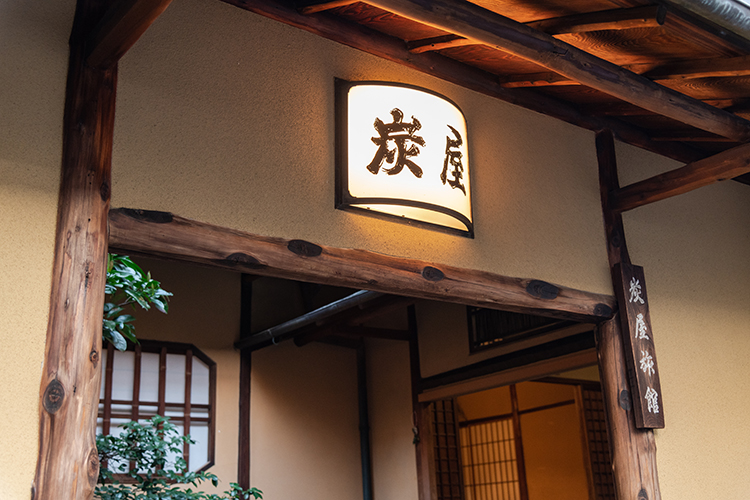 The faint and indistinct lighting creates an atmosphere that’s unique to the “tea ceremony inn”. 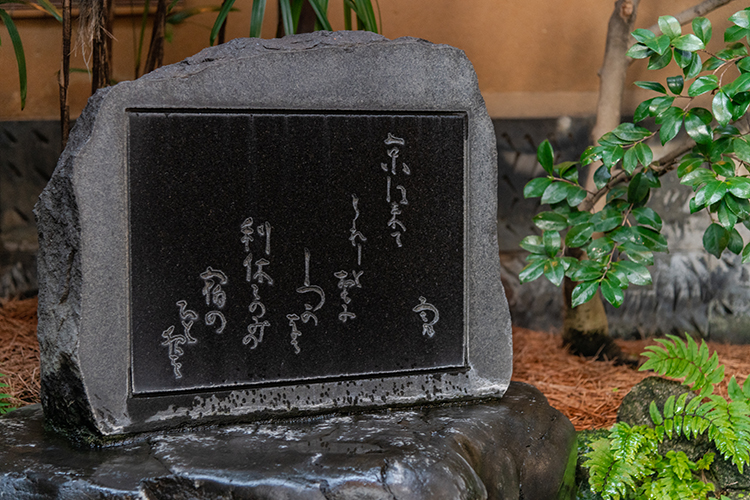 Welcoming the guests at the entrance is a waka (classical Japanese poetry) engraved monument from Isamu Yoshii. It reads “Kyonikite Ureshitoomofu Shitsukanaru Rikyukonomino Yadonohitoyawo” (Happy to come to Kyoto to spend a night at an inn that is to the liking of Rikkyu) 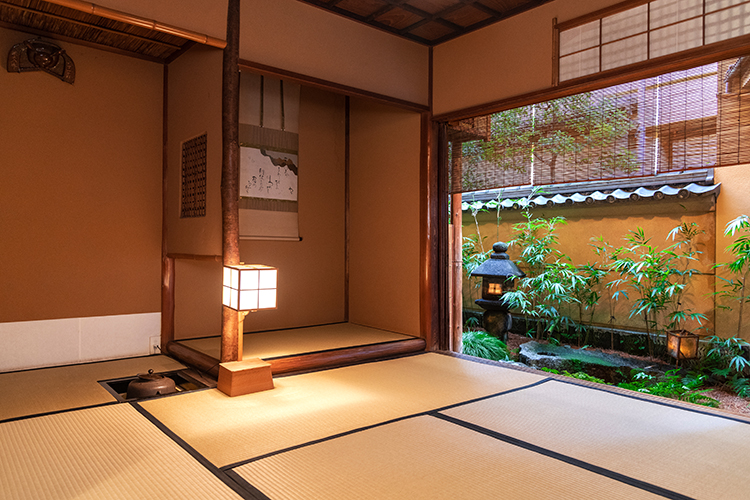 There are a total of five rooms in the inn. Among them, the most famous one is a tearoom with four tatami mats called “Tama Usagi An”. It was named after the 14th generation Urasenke family head, Tantansai, for he was born in the year of the rabbit. An iron kettle is hung on the evenings of the 7th and 17th of every month as the inn customarily invites its guests to a tea ceremony after dinner. The inn also holds a special tea ceremony every month. (More information about the special tea ceremony can be found here:http://www2.odn.ne.jp/sumiya/news.html） 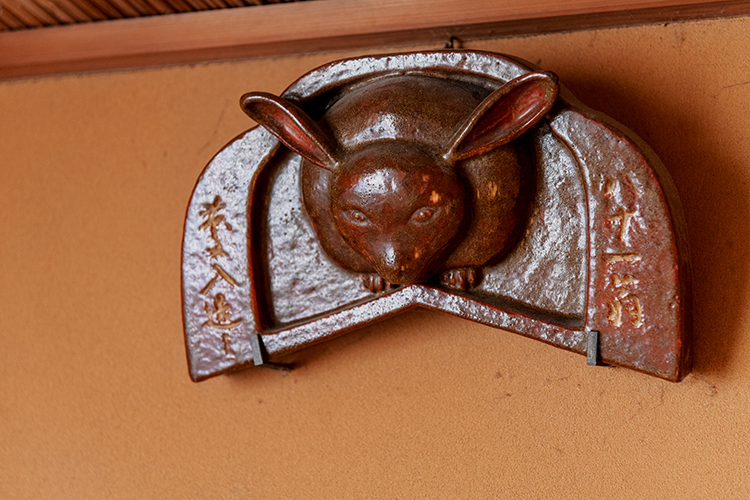 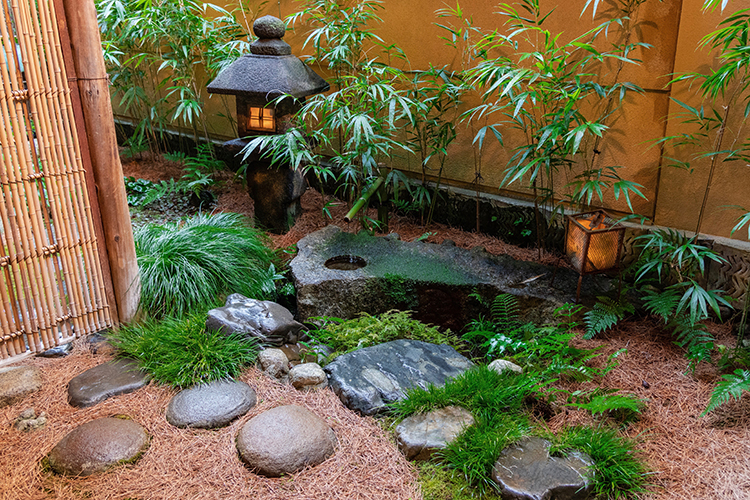 A rabbit motif displayed in the teamaza (a tatami where a tea hosts prepares tea) section of the tearoom next to the alcove. Created by the 11th generation head of Rakuyaki family, Keinyuu, it was originally made as a maegawara (a piece of semi circle earthenware placed in the hearth to obstruct fire). The playfulness from the previous generations can be seen in these small details.

The garden overlooking the tearoom is decorated with historical objects. The tsukubai (a place where guests crouches down to wash their hands before entering the tea room) called “Pity stone” is an unused stone that was donated when the Osaka castle was built. 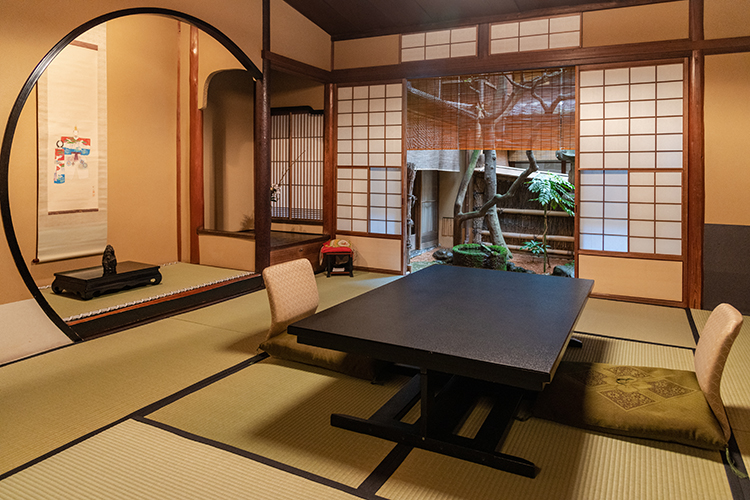 Imitating the Sengetsutei of Tougudou from the Silver Pavillion, “Sengetsutoko” is a novel design that depicts the rising moon with curving lines in front of the alcove. It currently mainly functions as a waiting room that welcomes many guests for tea parties. 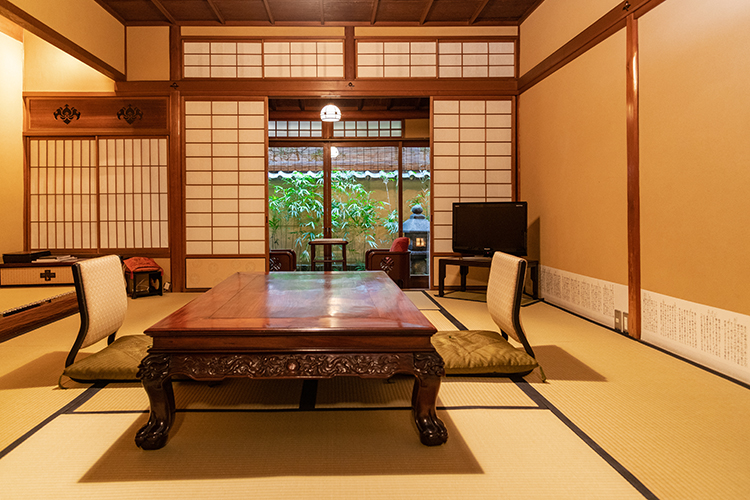 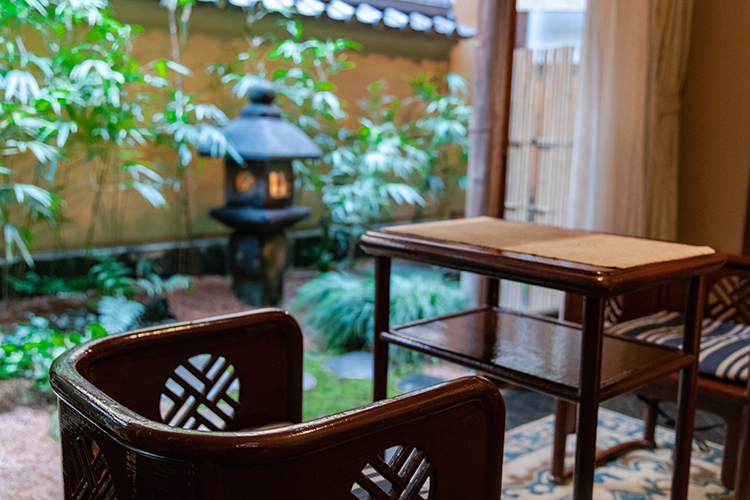 Izutsu is a room that has been there since the inn’s establishment. It is now a guest room furnished with new Koyamaki bath and toilet after renovation. From the lacquered papier-mâché table to the chairs, one can feel the respect towards Japanese tradition from the inherited furniture that is hard to obtain today. An impressive Christian lantern with the statue of Mary hidden in the lower bulge sits in the garden to allow guests to appreciate the beautiful garden to their heart’s content. 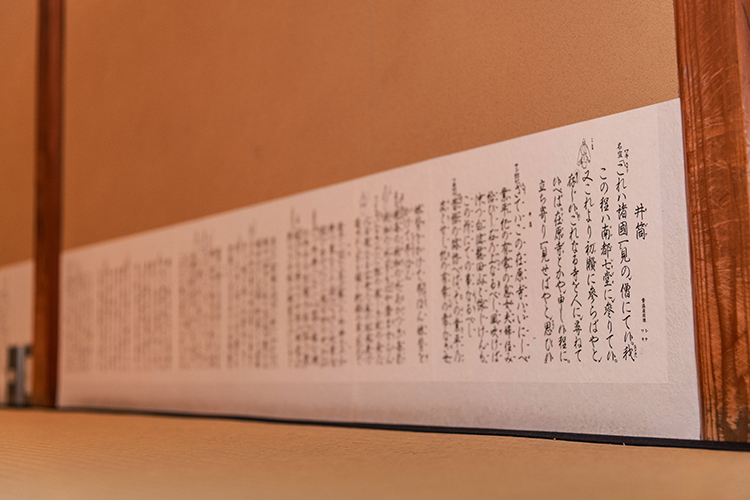 Within guest rooms “Izutsu” and “Matsukaze” related to Yokyoku (Noh songs) are wallpaper explaining how Noh songs were the origins for the names of each room. Using the actual paper used by the predecessor who was interested in Yokyoku, the papers make a tasteful appearance. 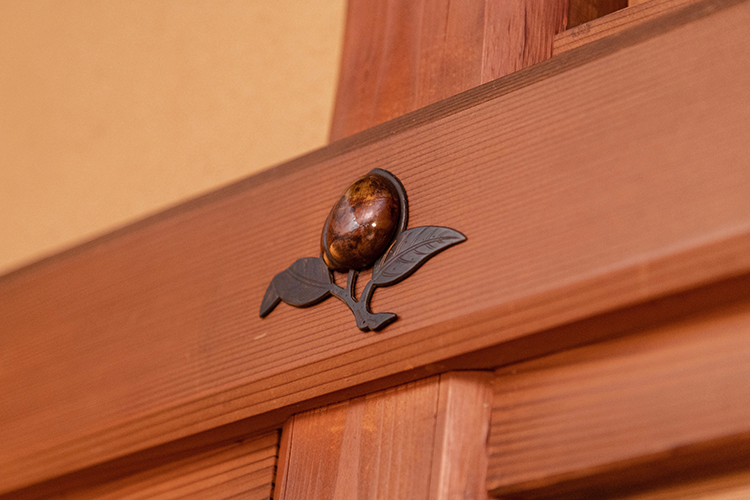 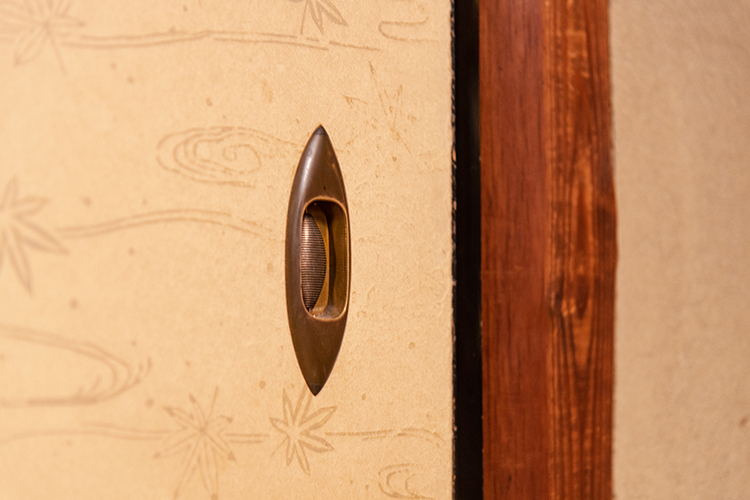 Remnants of the former foundry can be seen in the elaborate designs in forms of bamboo leaves, gourds, and spools on the guest door pulls and nail head covers. 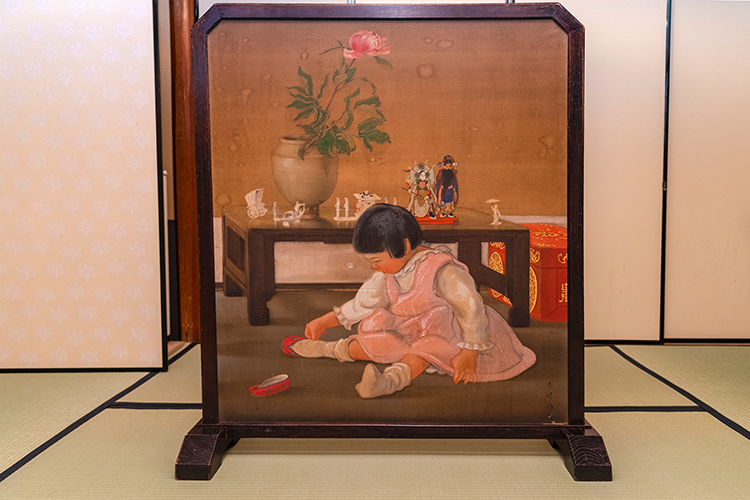 This is a folding screen of the former proprietress in her teenage years drawn by a guest from Manchuria. It is a masterpiece of the family’s memories but also as a valuable historical resource for it showcases the high-quality lifestyle back in the day. 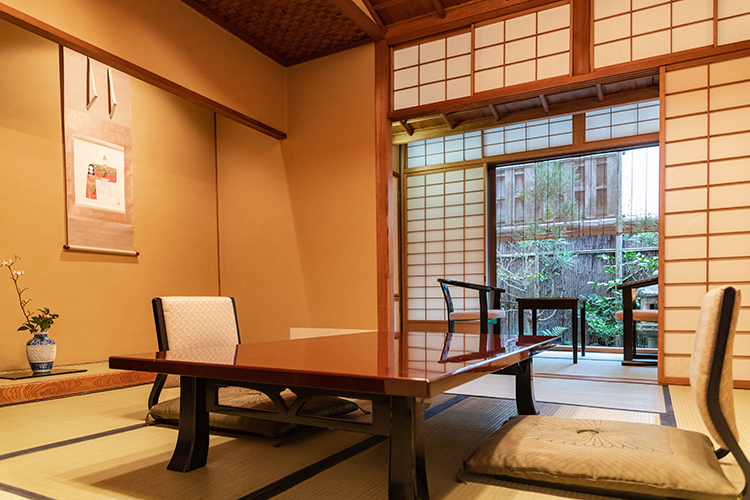 Eight rooms were added to during the Tokyo Olympics. The simple and effortless Showa designs enclose a time for relaxation. While maintaining traces of a tearoom, guest room “Ume” has a ceiling scenery that adds a modern touch to its atmosphere. It is a room loved by the previous generation Danjūrou Ichikawa. 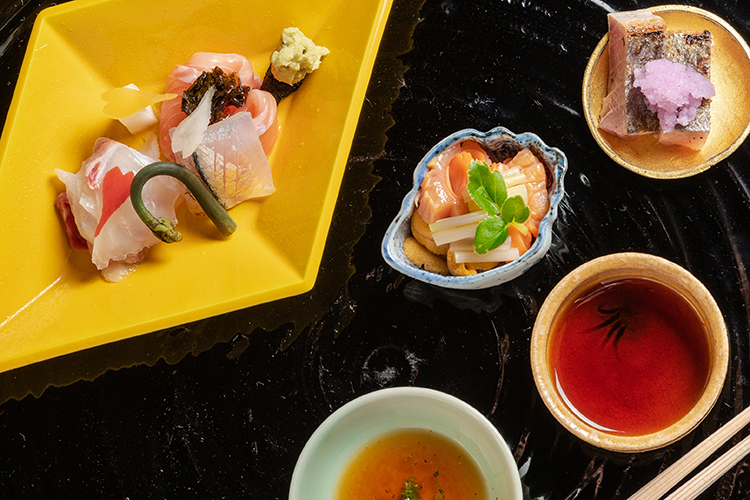 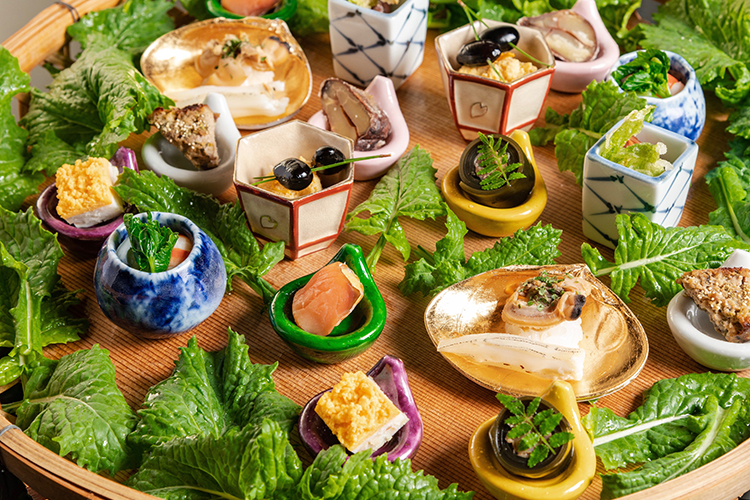 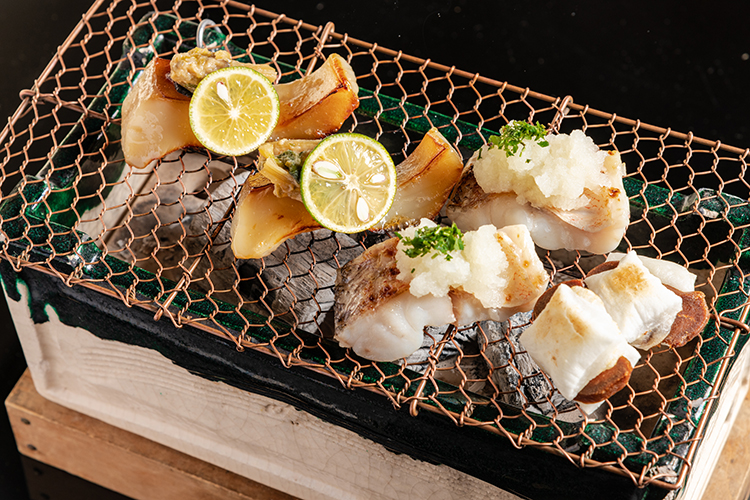 Kyoto cuisine that makes full use of the wholesome seasonal ingredients including Kyoto vegetables. Their creative plating that conveys the elegance and seasonality of the ancient capital is also fun for the eyes.