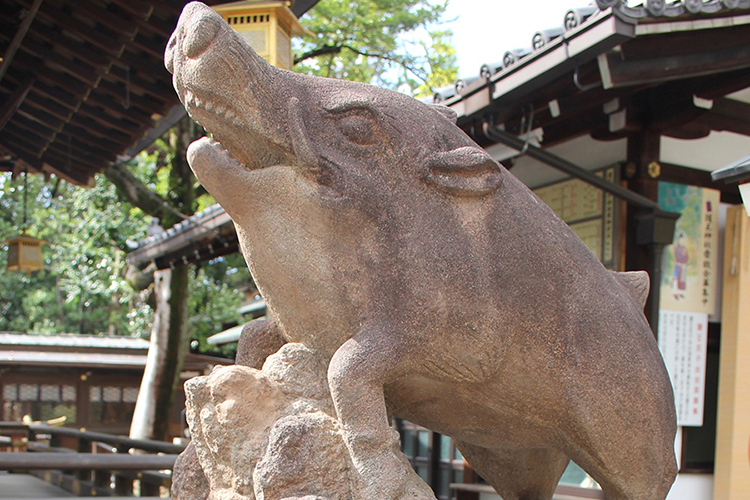 Welcoming guests from the west of the Kyoto Imperial Palace is a stone boar guardian. Worshipers come from all over the country as Goou Shrine offers blessings good for the legs and waist of the body.

The shrine worships an official from the Nara period, Kiyomaro Wakeno, who contributed to the founding of the ancient capital of Kyoto. His statue was originally enshrined in the grounds of Jingo Temple in the Rakusei area of Mt. Takao, but it was moved in 1866 to its current location in front of the Kyoto Imperial Palace, Hamagurigomon, based on the imperial order of Emperor Meiji. Later, his sister, Hiromushi Wakeno, was also enshrined as the main deity. Among the many divine virtues offered by the shrine, the one that earns faith from its visitors is its promise to give “healthy legs and waist and recovery from illness and injuries”. The reason for that is because when Koyomaro injured his legs and couldn’t stand, 300 wild boars appeared to save him from his troubles and healed his legs. At the same time, the shrine is also admired among those born in the year of the Boar for giving them particular benefits as they have a deep connection with boars. Master Houunsai of the Urasenke family, also born in the year of the Boar, visited the shrine occasionally, left a deep impression among those who practices tea. It is a shrine visitors will want to stroll through slowly as there are many highlights inside the shrine grounds. 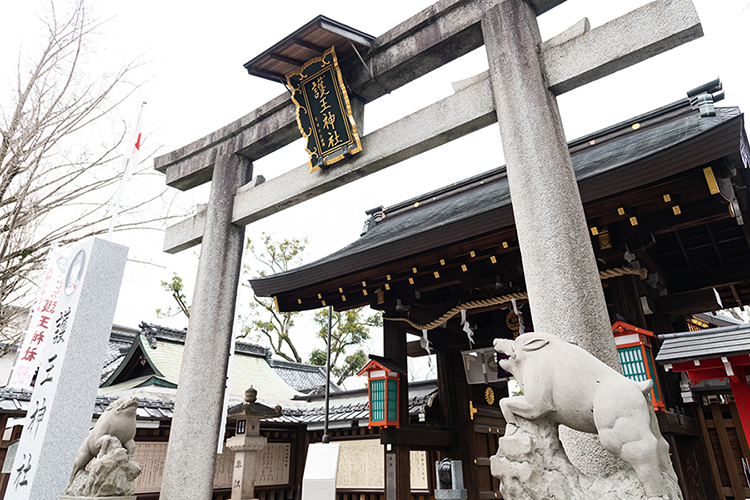 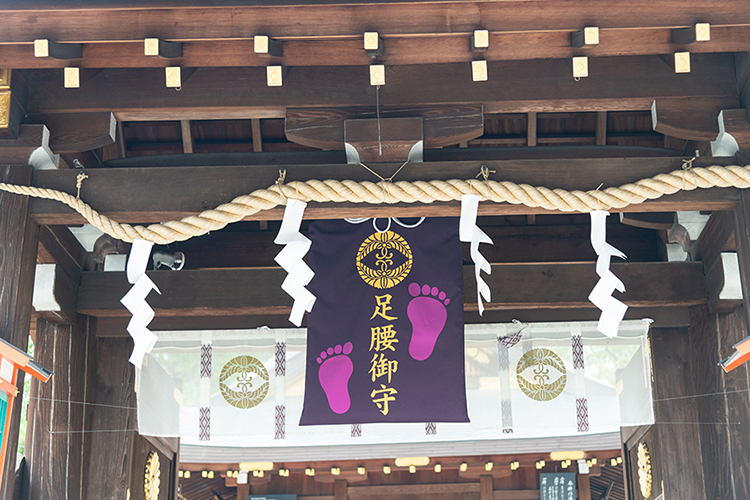 Facing Karasuma Street, at the front of Hamagurigomon of the Imperial Palace, stands a magnificent torii gate and stone boar guardians, the symbol of the Goou Shrine. Passing the tori is a front gate bestowed to the shrine that was used for Emperor Taisho’s accession ceremony. It is heralded that those who pass under this gate for their visit shall receive blessings from the shrine with a large good luck charm for the legs and waist. 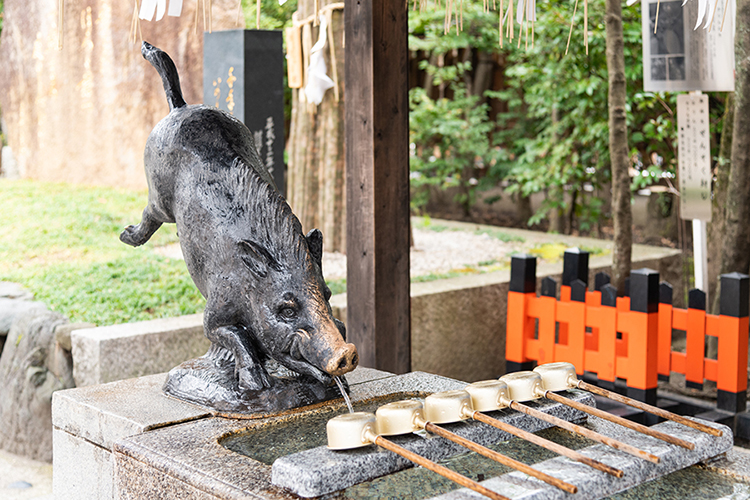 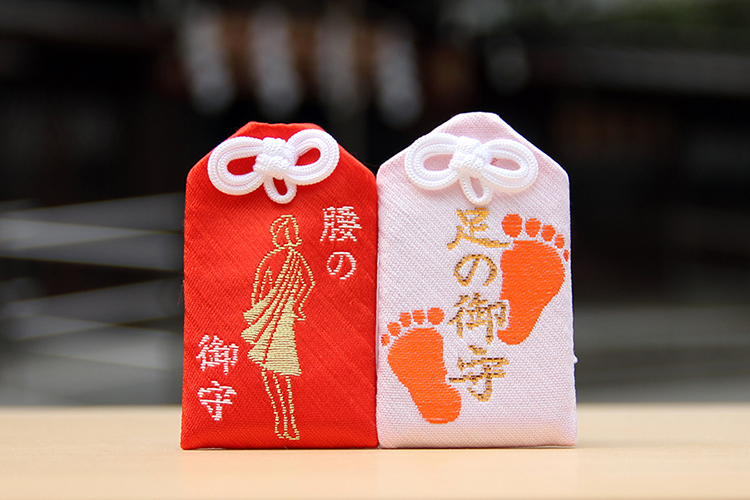 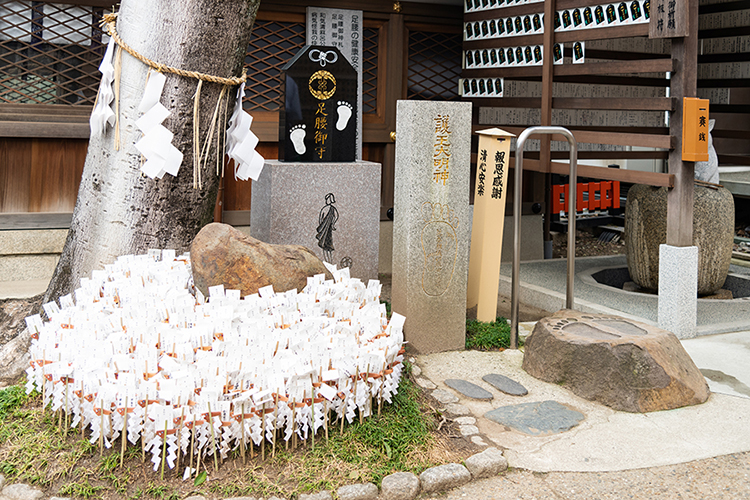 Those who want to pray for the recovery of a foot or back disease and injuries should visit the Monument for Restoration of Foot Atrophy and pray by standing on the foot shaped stones or by rubbing the monument. On the 21st of very month, the shrine holds a Foot and Waist Festival to pray for good conditions for the legs and waist. Next to the monument in the direction facing the main shrine is a towering cypress tree. At the base of the tree sits a Wishing Boar stone statue surrounded by visitor’s wishes pinned to the ground (kuratateikuji). It is a type of prayer special to the Goou Shrine. 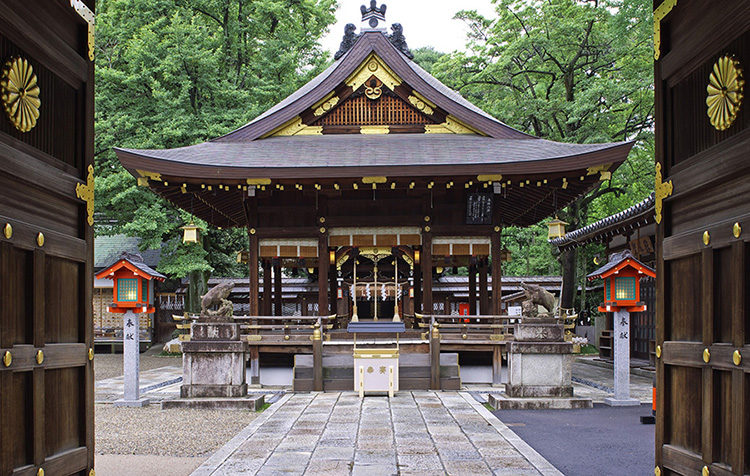 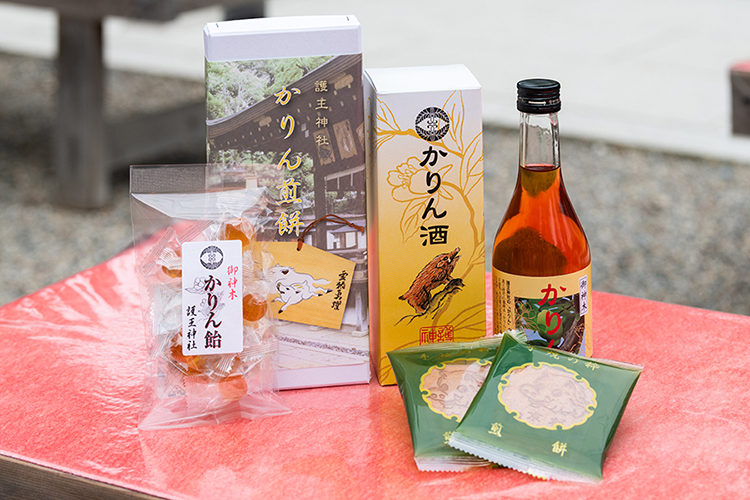 Within the shrine grounds stands a large Chinese quince. It is considered a sacred tree for how effective the seeds are in preventing asthma. Large amounts of its seeds are gathered every year to make Chinese quince liquor, rice crackers, and candies. These gifts from the Goou Shrine can be found only at the front of the shrine. 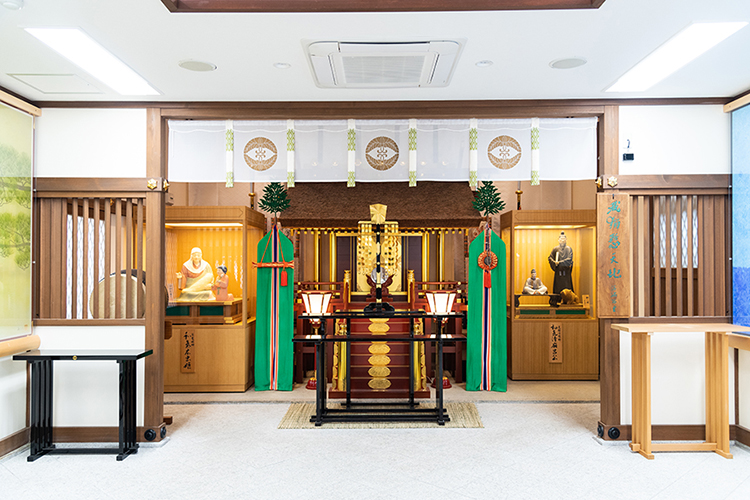 This is a prayer hall used for praying various wishes including the recovery of injured legs and waist. Overlooking the two sides of the hall are counters hosting the main deities: the main god of the Goou Shrine, Kiyomaro Wakeno, and his sister, Hiromushi Wakeno, god of benevolence and mercy, revered as the guardian of children. 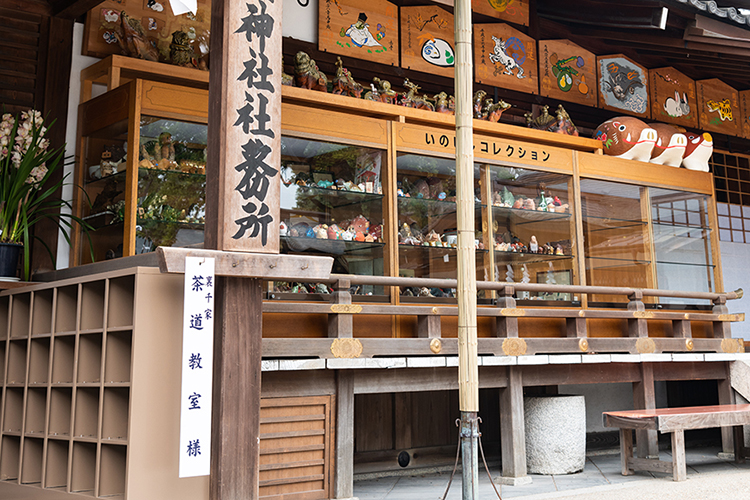 Inside the shrine office is a tearoom that has been used for Urasenke tea class practices. At the front of the office is a case with a lined up “boar collection” donated from all over the country.